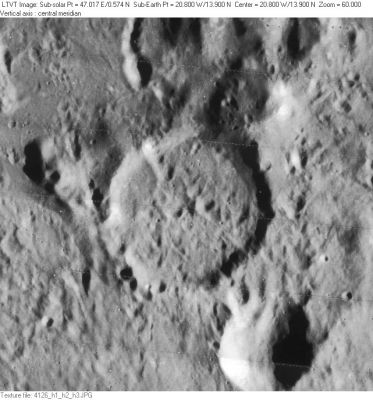 (IAU Directions) GAY-LUSSAC.--A very interesting ring-plain, 15 miles in diameter, situated in the midst of the Carpathian Highlands N. of Copernicus, with a smaller but brighter and deeper formation (Gay-Lussac A) on the S.E. of it, and a conspicuous little crater, not more than 2 or 3 miles in diameter, between the two. The interior of Gay-Lussac is traversed by two coarse clefts, lying nearly in a meridional direction. The more westerly runs from the foot of the S. wall, near the little crater just mentioned, across the floor to the low N. border, which it apparently cuts through, and extends for some distance beyond, terminating in a great oval expansion. The other, which is not shown in the maps, is closely parallel to it, and can be traced up to the N. border, but not farther. Schmidt represents the first as a crater-row, which it probably is, as it varies considerably in width. From the S.W. side of the formation extends a long cleft, terminating at the end of a prominent spur from the S. side of the Carpathians. There are also two remarkable rill-like valleys, commencing on the N. of Gay-Lussac A, which curve round the E. side of Gay-Lussac.

Joseph Louis Gay-Lussac (December 6, 1778 - May 9, 1850) was a French chemist and physicist. He is known mostly for two laws related to gases, and for his work on alcohol-water mixtures, which led to the degrees Gay-Lussac used to measure alcoholic beverages in many countries. In 1804 he made a hot-air balloon ascent with Jean-Baptiste Biot to a height of 6.4 kilometres in an early investigation of the Earth's atmosphere. He wanted to collect sample of the air at different heights to record differences in temperature and moisture.