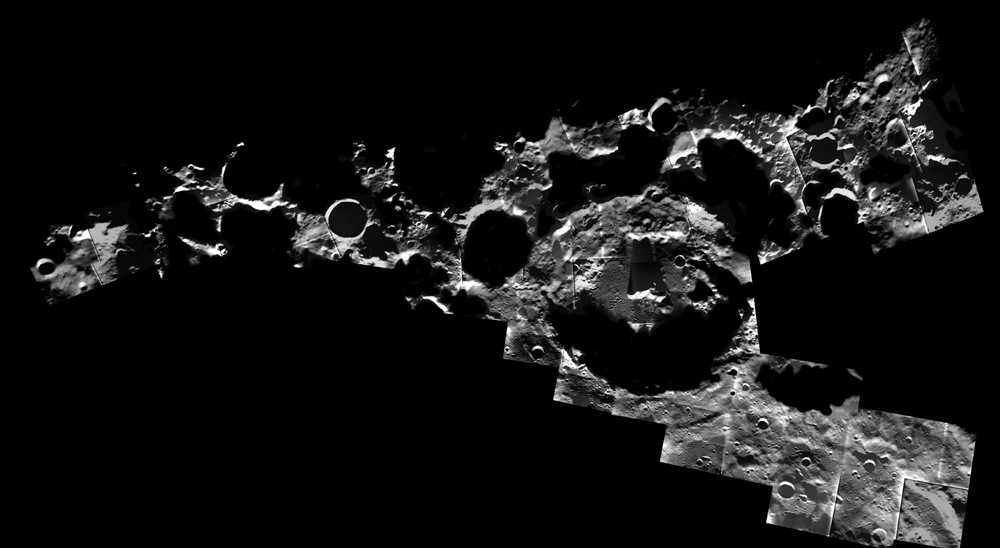 At the 39th Lunar and Planetary Science Conferencethat Chuck Wood is currently attending, a new image of the lunar South Pole has just been released. It shows the part of the Moon that is nearly impossible to see in detail from the Earth due to extremeforeshortening of the terrain. The lunar South Pole is a possible target for future manned exploration due to the prospect of long hours of available sunlight (which is useful for electrical power generation) and speculation that there may be some water trapped in the permanently shadowed craters (water being used for life support and industrial applications). This image is a composite of many images that where captured by the Advanced Moon Imaging Experiment (AMIE) on board the SMART-1 lunar probe, launched back in 2003. Due to the changing illumination of the South Pole, the images that make up the composite image above where accumulated over the time period between December 2005 and March 2006, a time when the Sun was near its southernmost latitude (south polar summer), giving the maximum illumination. The area covered is approximately 500 x 250 km with 50 m per pixel resolution. The lunar South Pole resides just inside the rim of Shackleton, the small circular crater left of centre (see ESA-labeled image). The long shadows from the central peaks of 101-km diameter Amundsen point roughly in the Earthward direction.

Technical Details
High-resolution SMART-1 south polar mosaic produced and analysed in the framework of a study project for the design and operations of lunar polar robotic landers and rovers, by Marina Ellouzi, a Master’s student in space engineering at the Paris-Meudon Observatory.

Note: Chuck Wood is at the Lunar & Planetary Science Conference. LPODs for March 10 through March 16 are being posted by a Wikispaces members. You can contribute your own LPOD. It's easy! See the LPOD Index page for submission guidelines.

(1) In addition to the earlier observations of the Moon’s South Pole by Clementine, and the many new observations presumably being obtained by Kaguya and Chang’e-1, the Lunar Orbiter missions collected about 16 high resolution images of the south polar region, showing its changing appearance with the Sun at a variety of azimuths while moderately north of the Moon’s equator. Because Lunar Orbiter covered a large area in each frame, these can be more easily assembled into an animation than the others. At any sun angle, NASA can now supposedly predict with some accuracy the expected appearance of the Earthward-facing polar craters, and the shadows they cast, using their current high-resolution radar-based topographic model as demonstrated in the synthesized animation mentioned in the Feb 28, 2008 LPOD.

P.S.: the double set of sunlit central peaks in Amundsen (one seeming to cast almost no shadows), seems a bit odd, since most other observations show just one group.

(2) I think Chuck has mentioned that Shackleton Crater appears to have very steep sides at about a 30-degree pitch (angle?). The whole area looks very rugged. I wonder if it has a suitable corner for building a proposed Moon base?

I'm curious about the south polar axis of the Moon being located inside the rim of Shackleton. How do scientists determine the precise location of the Moon's axis? I'm interested in this because I gave a slide presentation about the Moon this past Monday at a public meeting of our astronomy club. I showed images of the south polar region and mentioned Shackleton as being the site for the Moon's axis, etc. No one in the audience asked, but it would be nice to be prepared in case someone asks "How do we know that?" at a future presentation.

By the way, my talk was "an interesting experience", as they say. We hold our meetings in a metropolitan park system nature center. The center's laptop and projector were mounted in the back of the room in a new setup featuring a wireless remote. The new remote turned out to be "twitchy." It shut off the projector twice in the middle of my talk, and there was a noticeable lag in advancing the slides. It threw off my timing a bit. I'm new to giving PowerPoint presentations. I checked the laptop before the start of the meeting, using the arrow keys to advance the slides. It worked fine, so I assumed all was well. I made the mistake, however, of trusting the new remote.
It was definitely a learning experience.

(3) That's a fascinating question, Bill, and I don't really know the answer.

I do know that the Moon, like the Earth, can be thought of as a giant top (or gyroscope) whose spin axis is relatively fixed in space. The basic rules of how it spins were worked out by the 17th century astronomer Cassini. I don't know how he arrived at his rules, but you can perhaps think about how you would locate the axis of a spinning ball that you can observe only from a distance. You could only do this if the ball has surface markings you can see rotating.

In the case of the Moon we have the impression, from Earth, that there is almost no surface motion; but since most of us believe the Moon itself is rotating around the Earth, the relative constancy of the positions of the markings is a clue that those surface markings must themselves be spinning about some axis inside the Moon once a month. And that axis must be roughly perpendicular to the plane of the orbit or the spin couldn't counteract the effect of the orbital motion. Another clue as to the direction of the spin axis in space is how the pattern of sunlight varies during periods of a month (one spin) and a year. We know, for example that the Earth's axis is tipped 23-1/2° relative to the plane of its orbit about the Sun, in part because as it completes a spin (one day) there are corresponding regions around the poles (up to 23-1/2° in radius) that receive no light - alternating from north to south during the year. The Moon similarly has "arctic circles" that define the center of the spin axis and the amount of its tip relative to the plane of the Earth-Moon's orbit about the Sun. But as Cassini deduced, the Moon axis' tip is only about 1-1/2°, making those shadowed zones very small and hard to define accurately from Earth. Perhaps he observed instead the changing twist of the terminator relative to the surface features as seen at, say, First and Last Quarter. The seasonal variation in the twist seen over the course of a year is due to the tip of the spin axis.

Modern scientists, I suspect, would take a more sophisticated approach and think of each visible mark on the Moon's surface as being like a satellite orbiting the Moon's center at a fixed distance. Just as one might deduce the size and orientation of the orbits of Jupiter's moons by observing their motions over a long enough period, observations of the seemingly almost unchanging lunar surface features must reveal their true motions in space. For example, if an astronomer knows where the center of the Moon is located in space, then carefully noting the direction and offset of the center of Plato from that center as seen from Earth would define a certain line in space on which Plato must lie (relative to the center), and over the course of a month that line would trace out a cone relative to the stars. The Moon's spin axis would lie along the center of that cone. Of course, this assumes we know how many kilometers the floor of Plato is from the Moon's center; but one could start with features near the limb (whose offset in kilometers is directly observable), and then gradually add other features on the assumption they are all part of a rigid body spinning about a common axis. Do this in practice sounds exceedingly complicated (as indeed the mathematical "theory of the Moon" is), but it seems clear that given a knowledge of how the Moon's center moves around the Earth, there would be only one set of surface feature positions and distances relative to that center and one location of the spin axis relative to those features that could account exactly for the slightly changing feature positions actually seen from Earth -- and that one self-consistent set of values could eventually be determined by trial and error.

As noted at the start, this may not really be how scientists determine the poles' positions, but however it is done, the result is expressed in terms of a control network in which each feature is assigned a latitude and longitude relative to the polar axis consistent with all the observations. The surface points at which the assigned latitude goes to +90° and -90° in this network should therefore be the points at which the rotation axis penetrates the surface. There are Wiki pages showing what are currently believed to be the Moon's North Pole and South Pole determined in this way. And, before you ask, the zero point of longitude is normally defined as that surface point which, on average, points towards the Earth's center.

(4) Jim--Thanks very much for your information. I've copied it to my "Moon Information" folder.

I'm trying to think how I could briefly summarize this information to respond to a potential question from the audience regarding Shackleton Crater and the Moon's south polar axis. Perhaps if I say the surface location for the spin axis was determined through close observation and mathmatical measurements of the Moon's movements over a long period of time, using surface features as reference points. (??)