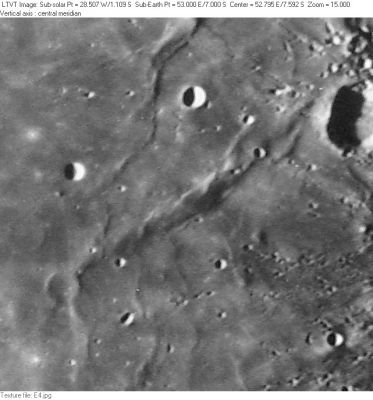 Consolidated Lunar Atlas; Plate E4 (remapped to aerial view) The large crater in the upper right is 43-km Bilharz. Dorsa Mawson extends diagonally from just west of Bilharz to the 22-km ghost crater Goclenius U in the lower left. The 8-km crater in the pockmarked area in the lower right is Al-Marrakushi, Above Dorsa Mawson can be seen 11-km Ibn Battuta (left) and 12-km Lindbergh (center). The ridge extending northward from between Ibn Battuta and Lindbergh is the southern part of Dorsa Geikie.