Dionysius (and its system of dark rays) 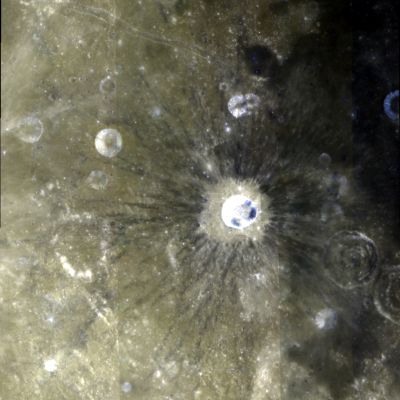 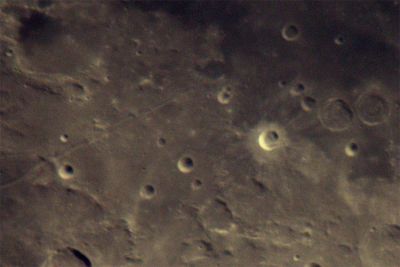 LPOD Photo Gallery Lunar Orbiter Images Apollo Images
Two extraordinary close-ups of Dionysius, made by Lunar Orbiter 5, are seen here (frames 080 and 083). One of them, Frame 083, shows also the little craterlet between Ritter B and C, which is an interesting target for those who want to test their telescope's optics (source: the dedicated moon-observer Antoine van der Jeugt). Research Lunar Orbiter 5 photographs: Danny Caes.

Dionysius is quite an easy target during Full Moon, and an exquisite example of a High-Albedo crater whose unique system of dark rays were overlooked for hundreds of years, until reported in 1965 by Vern Smalley.
The LPOD Leonardo and Miguel shows an interesting photograph of the Waxing Crescent Moon, with earthshine, and also the remarkably distinct looking bright crater Dionysius in it (beyond the western "coast" of Mare Tranquillitatis). The cause of its distinct appearance (of Dionysius) is perhaps the system of dark rays around it, which makes Dionysius some kind of "popping out" crater, especially during "full moon" circumstances. - DannyCaes Feb 8, 2014

(IAU Directions) DIONYSIUS.--This crater, 13 miles in diameter, is one of the brightest spots on the lunar surface. It stands on the W. border of the Mare, about 30 miles W.N.W. of Ritter. A distinct crater-row runs round its outer border on the E., and ultimately, as a delicate cleft, strikes across the Mare to the W. side of Ritter. Both crater-row and cleft are easy objects in a 4 inch achromatic under morning illumination.

How Deep is that Hole? Regional view

Remote Sensing Studies of the Dionysius Region of the Moon. Giguere and others (2005) LPSC 36, #1092. Full article