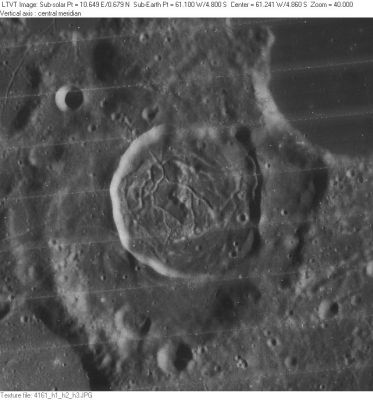 (IAU Directions) DAMOISEAU.--Consists of a complex arrangement of rings, an enclosure 23 miles in diameter, with a somewhat smaller enclosure placed excentrically within it (the N. side of both abutting on a bright plateau), with two large depressions intervening between their E. borders. This peculiarity, almost unique, renders the formation an especially interesting object. Damoiseau is situated on the E. side of Grimaldi, on the W. coast-line of the Oceanus Procellarum, from which the S.E. border rises at a gentle inclination. On the N.E. there is a curious curved inflexion of the Mare, bounded by a bright cliff, representing probably the W. side of a destroyed ring, a supposition which is strengthened by the existence of a faint scar on the surface of the sea, extending in a curve from one extremity of the bay to the other, and thus indicating the position of the remainder of the ring. A conspicuous little crater stands at the S. end of it, and two others some distance to the E. The smaller component of Damoiseau contains a low central ridge.

A tiny island in the southwestern part of Oceanus Procellarum