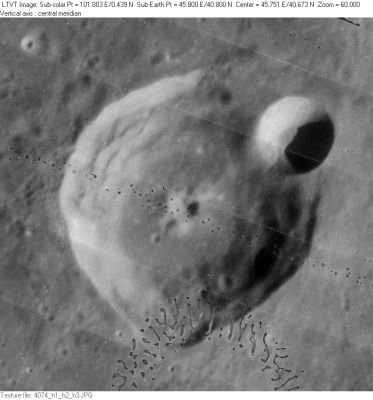 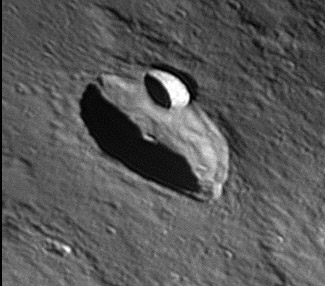 Left: LO-IV-074H Overhead view from Lunar Orbiter. The 13-km diameter circular crater on Cepheus' northeast rim is Cepheus A. In addition to its central peaks, Cepheus appears to have a 5-km diameter depression (a relatively fresh impact crater?) at its center.
Right: Damian Peach, April 16, 2006 An Earth-based view showing a small peak to the northeast of Cepheus' center. This appears to be at the end of a ridge, common to the two photos and just north of the feature casting the strong westward shadow in the Lunar Orbiter view.

(IAU Directions) CEPHEUS.--A peculiarly shaped ring-plain, 27 miles in diameter. The W. border is nearly rectilineal, while on the E., the wall forms a bold curve. There is a very brilliant crater on the summit of this section, and a central mountain on the floor. The E. wall is much terraced. E. of Cepheus, close to the brilliant crater, there is a cleft or narrow valley running N. towards Oersted.