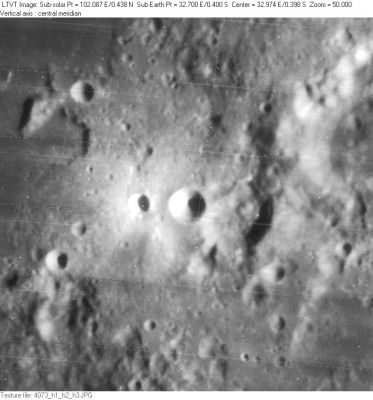 LO-IV-073H: The image is centered on 7-km diameter Censorinus A. Censorinus itself is the smaller, bright-haloed crater to its left. The 15-km crater to the right of Censorinus A is labeled Censorinus AB (a name no longer officially recognized by the IAU) on the AIC map, and the still larger one half-visible along the right-hand margin is Maskelyne A (29 km). Censorinus, together with its halo, is, visible as a bright, sometimes-diffuse, patch at all sun angles; but at low sun angles, Censorinus A (also dusted with the bright ejecta) is more prominent on Earth-based photos.

(IAU Directions) CENSORINUS.--A brilliant little crater, with very bright surroundings, in the Mare Tranquillitatis, nearly on the moon's equator, in E. long. 32 deg. 22 min. Another smaller but less conspicuous crater adjoins it on the E. On the Mare to the S. extends a delicate cleft which trends towards the Sabine and Ritter rill system.

Ring Around a Basin. Lunar Ice discovered in 1904 (W.H.Pickering's somewhat odd observations of the high-albedo nimbus at Censorinus)