Sabine (of the Ritter-Sabine pair) 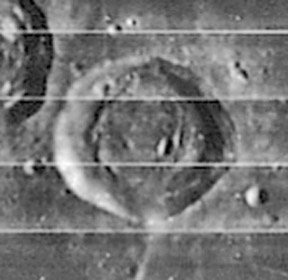 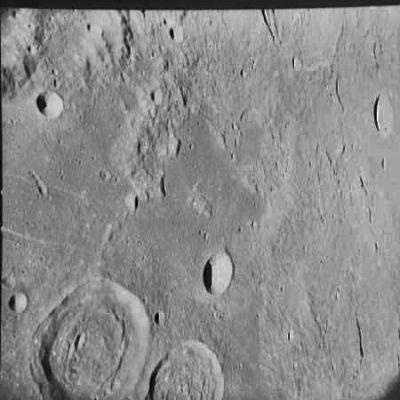 Left: LOIV-085-h1 (shows Sabine and NASA's small bowl-shaped Dark Crater immediately southeast of it, with Ritter west-northwest of Sabine).
Right: Apollo AS-10-32-4760 (this south-up view shows twin craters Sabine and Ritter, with the bowl-shaped Schmidt nearby).

(IAU Directions) SABINE.--The more easterly of a remarkable pair of ring-plains, of which Ritter is the other member, situated on the W. side of the Mare Tranquillitatis a little N. of the lunar equator. It is about 18 miles in diameter, and has a low continuous border, which includes a central mountain on a bright floor. From a mountain arm extending from the S. wall, run in a easterly direction two nearly parallel clefts skirting the edge of the Mare. The more southerly of these terminates near a depression on a rocky headland projecting from the coast-line, and the other stops a few miles short of this. A third cleft, commencing at a point N.W. of the headland, runs in the same direction up to a small crater near the N. end of another cape-like projection. At 8 h. on April 9, 1886, when the morning terminator bisected Sabine, I traced it still farther in the same direction. All these clefts exhibit considerable variations in width, but become narrower as they proceed eastwards.