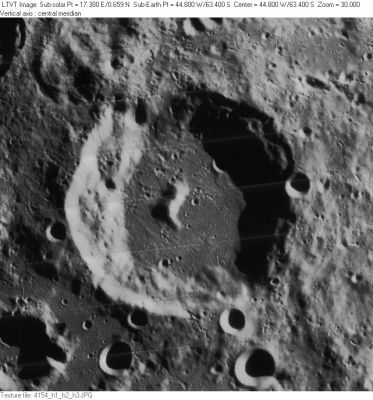 LO-IV-154H Several lettered craters named after Bettinus are visible here. These include Bettinus F, the 6-km crater on the main crater's northeast floor, nearly covered by shadow; 7-km Bettinus E, on the rim nearby; 8-km Bettinus H, also on the rim at 5 o'clock; 9-km Bettinus D, outside the rim at 7 o'clock; and ragged 26-km Bettinus A in the lower left corner. The 12-km crater along the lower right margin (below Bettinus H) is Kircher B, named for the nearby crater to the south.

(IAU Directions) BETTINUS.--Another ring-plain of the same type and size, some distance S. of Zuchius, with a massive border, terraced within, and rising on the E. more than 13,000 feet above the floor, on which stands a grand central mountain, whose brilliant summit is in sunlight a long time before a ray reaches any part of the deep interior.