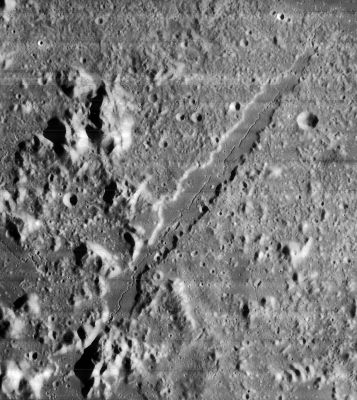 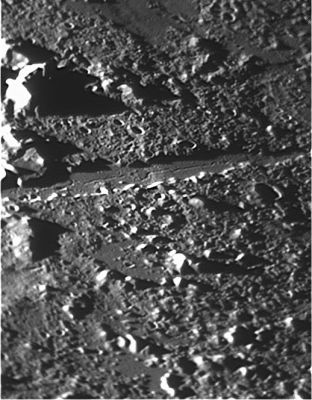 Paintings and drawings of the Alpine Valley

(IAU Directions) THE GREAT ALPINE VALLEY.--A great wedge-shaped depression, cutting through the Alps E. of Plato, from E.N.E. to W.S.W. It is more than 80 miles in length, and varies in breadth from 6 miles on the S. to less than 4 miles on the N., where it approaches the S. border of the Mare Frigoris. For a greater part of its extent it is bounded on the S.E. side by a precipitous linear cliff, which, under a low evening sun, is seen to be fringed by a row of bright little hills. These are traceable up to one of the great mountain masses of the Alps, forming the S.E. side of the great oval-shaped expansion of the valley, whose shape has been appropriately compared to that of a Florence oil-flask, and which Webb terms a grand amphitheatre. On the opposite or N.W. side, the boundary of the valley is less regular, following a more or less undulating line up to a point opposite, and a little N. of, the great mountain mass, where it abuts on a shallow quasi enclosure with lofty walls, which, projecting eastwards, considerably diminish the width of the valley. South of this lies another curved mountain ring, which still farther narrows it. This curtailment in width represents the neck of the flask, and is apparently about 16 or 17 miles in length, and from 3 to 4 miles in breadth, forming a gorge, bordered on the E. by nearly vertical cliffs, towering thousands of feet above the bottom of the valley; and on the W. by many peaked mountains of still greater altitude. At the entrance to the amphitheatre, the actual distance between the colossal rocks which flank the defile is certainly not much more than 2 miles. From this standpoint the view across the level interior of the elliptical plain would be of extraordinary magnificence. Towards the S., but more than 12 miles distant, the outlook of an observer would be limited by some of the loftiest peaks of the Alps, whose flanks form the boundary of the enclosure, through which, however, by at least three narrow passes he might perchance get a glimpse of the Mare Imbrium beyond. The broadest of these aligns with the axis of the valley. It is hardly more than a mile wide at its commencement on the S. border of the amphitheatre, but expands rapidly into a trumpet-shaped gorge, flanked on either side by the towering heights of the Alps as it opens out on to the Mare. The bottom, both of the amphitheatre and of the long wedge-shaped valley, appears to be perfectly level, and, as regards the central portion of the latter, without visible detail. Under morning illumination I have, however, frequently seen something resembling a ridge partially crossing the neck, and, near sunset, a tongue of rock jutting out from the W. flank of the constriction, and extending nearly from side to side. At the base of the cliff bordering the valley on the S.E., five or six little circular pits have been noted, some of which appear to have rims. They were seen very perfectly with powers of 350 and 400 on an 8 1/2 inch Calver reflector at 8 h. on January 25, 1885, and have been observed, but less perfectly, on subsequent occasions. The most northerly is about 10 miles from the N.E. end of the formation, and the rest occur at nearly regular intervals between it and the neck. In the neighbourhood of the valley, on either side, there are several bright craters. Three stand near the N.W. edge, and one of considerable size near the N.E. end on the opposite side. A winding cleft crosses the valley about midway, which, strange to say, is not shown in the maps, though it may be seen in a 4 inch achromatic. It originates apparently at a bright triangular mountain on the plain S.E. of the valley, and, after crossing the latter somewhat obliquely, is lost amid the mountains on the opposite side. That portion of it on the bottom of the valley is easily traceable under a high light as a white line. The region N. of the Alps on the S.E. side of the valley presents many details worthy of examination. Among them, parallel rows of little hills, all extending from N.E. to S.W. There is also a number of still smaller objects of the same type on the W. side. The great Alpine valley, though first described by Schroter, is said to have been discovered on September 22, 1727, by Bianchini, but it is very unlikely that an object which is so prominent when near the terminator was not often remarked before this.