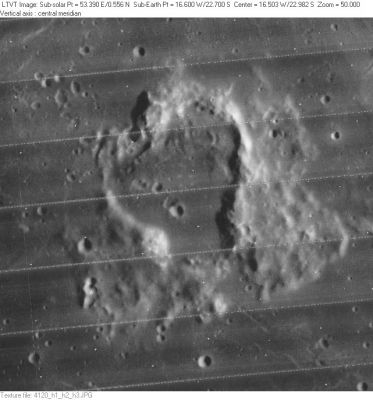 LO_IV-120H The IAU's Wolf is the upper-central part of this complex enclosure 47 km south of the center of Mare Nubium. The bay where the gulf between east and west ridges widens in the south is regarded by the IAU as a superimposed 17-km crater (Wolf B); while part of the shadow-casting area in the northeast is regarded as 7-km Wolf G, lying completely within the outline of the main named crater. The crisp 2-km circular crater at bottom center is Wolf E.

LPOD Photo Gallery Lunar Orbiter Images Apollo Images
- Although the name Wolf is not mentioned in the LPI's search-list of orbital Apollo photographs (Wolf should not be confused with Mons Wolff in the Apennine mountains!), it (Wolf at Mare Nubium) WAS photographed during the mission of Apollo 16 in april 1972. Wolf is noticeable just "above" (north of) the central and lowest part of the curved horizon in the oblique south-looking metric/mapping Fairchild-camera photograph AS16-M-2489 (zoom-able HiRes scan of the ASU's Apollo Image Archive).
Research: Danny Caes 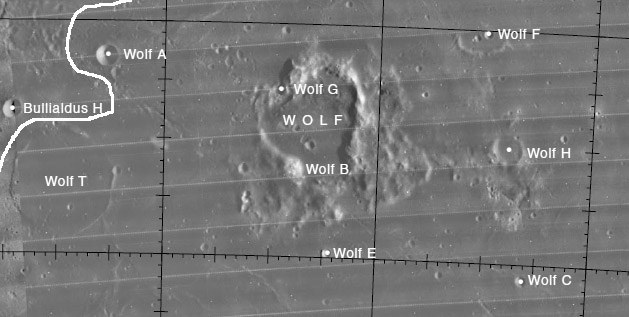