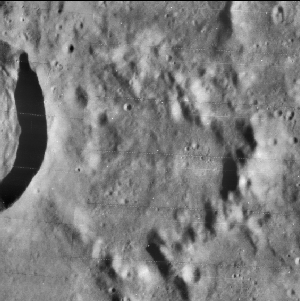 Lunar Orbiter IV (generated by USGS Web Map Service from photographic mosaic) The strong shadow on the left comes from the similarly sized, but much fresher, crater Agrippa. The larger of the two relatively faint depressions just east of the point where the rims of the larger craters meet on the north is 6-km Agrippa F. None of the other features in this view are named.