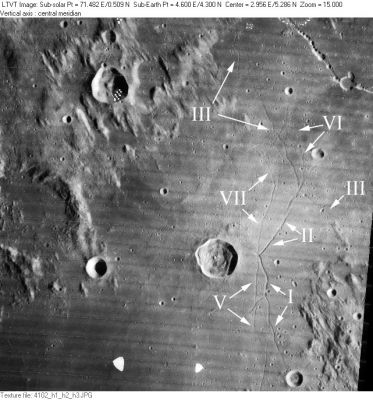 LO-IV-102H Triesnecker is the isolated 26-km polygonal crater to the lower right of center. To its west is the deeply shadowed circular 13-km Chladni, and beyond that 57-km Murchison. In the upper left is 23-km Ukert, and in the upper right 9-km Hyginus with the prominent crater chain/rille Rima Hyginus passing through it. Rimae Triesnecker is the name used to designate a series of rilles generally to the east of Triesnecker, which had several Roman-numeralled segments in the IAU nomenclature of Named Lunar Formations and the later System of Lunar Craters, from which these identifications are copied. Note that Rimae Triesnecker VI is a somewhat broader rille only marginally visible in this Lunar Orbiter view. It is seen better at lower sun angles, and should not be confused with the skinnier but more prominent unnumbered north-south rille to its west.

Rimae Triesnecker is a well-known system among dedicated observers of the moon. It's the perfect test-object for those who want to know if their telescope is capable of showing the whole system during ideal conditions of seeing and illumination (during local post-sunrise or pre-sunset circumstances). - DannyCaes Dec 25, 2017