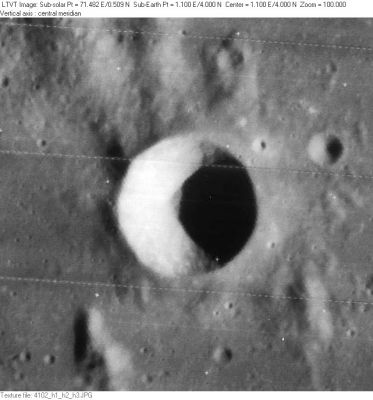 LPOD Photo Gallery Lunar Orbiter Images Apollo Images
- The search for possible appearances of crater Chladni on orbital photographs made during one or more missions of the Apollo project is a worthwile pastime. A candidate mission is Apollo 10, in which several oblique north-looking photographs were made of the nearby eastward located Triesnecker rille system.- DannyCaes May 29, 2010
- Apollo 10's AS10-32-4734 shows an oblique west-northwest looking view of Chladni during local sunrise. The crater near the frame's lower right corner is Triesnecker.
- Apollo 10's AS10-32-4821 shows Chladni in the lower right quadrant of the frame. The large eroded craters near Chladni are the couple of Murchison and Pallas.
- Chladni was also captured on several oblique north looking Fairchild camera frames made during the mission of Apollo 16. One of those frames is AS16-M-0842, in which bowl shaped crater Chladni is detectable near the central part of the curved horizon.
Research orbital Apollo 10 and Apollo 16 photography: Danny Caes