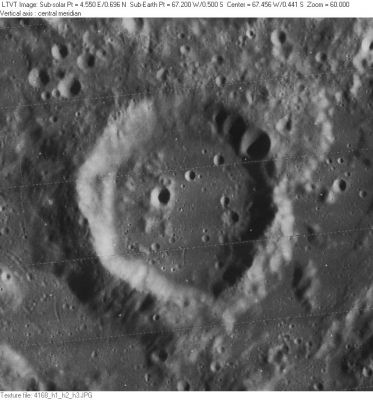 (IAU Directions) LOHRMANN.--This ring-plain, with Hevel(ius) and Cavalerius on the N. of it, is a member of a linear group, which, but for its propinquity to the limb, would be one of the most imposing on the moon's surface. Lohrmann, about 28 miles in diameter, is surrounded by a bright wall, which, to all appearance, is devoid of detail. Two prominent ridges, with a fine intervening valley, connect it with the N. end of Grimaldi. It has a large but not conspicuous central mountain. On the rugged surface, between the ring-plain and the W. edge of the Oceanus Procellarum, lies a very interesting group of crossed clefts, some of which run from N.W. to S.E., and others from N.E. to S.W. Three of the latter proceed from different points in a coarse valley extending from E. to W., and cross the ridges just mentioned. They follow a parallel course, and terminate on the S. side of a crater-row, consisting of three bright craters ranging in a line parallel to the coarse valley. On the N. side of these objects, and tangential to them, is another cleft, which traverses the E. and W. walls of Lohrmann, and, crossing the region between it and Riccioli, terminates apparently at the E. wall of the latter formation. No map shows this cleft, though it is obvious enough; and, when the W. wall of Hevel(ius) is on the morning terminator, the notches made by it in the border of Lohrmann are easily detected. Capt. Noble, F.R.A.S., aptly compares two of the crossed clefts to a pair of scissors, the craters at which they terminate representing the oval handles. On the grey surface of the Mare E. of Lohrmann is the bright crater Lohrmann A, from which, running N., proceeds a rill-like valley ending at a large white spot, which has a glistening lustre under a high light.