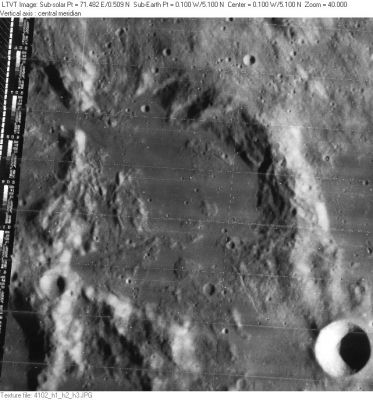 LO-IV-102H The west wall of Murchison is shared with the similarly sized crater Pallas (out of the field to its west). The 6-km crater on the lower part of that shared ridge is PallasC. The only satellite of Murchison visible in this view is 3-km MurchisonT with the flat gray floor inside Murchison's open SE rim, at about 5 o'clock. The deeply shadowed crater outside the rim (on the SE) is Chladni.

LPOD Photo Gallery Lunar Orbiter Images Apollo Images
Frame 085 , made by Lunar Orbiter 3, is an oblique north-northeastward image of Murchison, with Ukert in the distance. Research Danny Caes
Are there really no orbital Apollo photographs of Murchison? I can't believe it.- DannyCaes Jan 19, 2015
Apollo 10's AS10-32-4821 shows both Murchison and Pallas near the lower margin of the frame. Research Danny Caes

(IAU Directions) MURCHISON.--A considerable ring-plain about 35 miles across on the W., where it abuts on Pallas. It is a pear-shaped formation, bounded on the N. by a mountainous region, and gradually diminishes in width towards the S.W., on which side it is open to the plain. The walls are of no great altitude, but, except on the N.E., are very bright. At the S. termination of the E. wall there is an exceedingly brilliant crater, Murchison A, five miles in diameter and some 3,000 feet deep; adjoining which on the N.E. is an oval depression and a curious forked projection from the border. The only objects visible in the interior are a few low ridges on the W. side, and a number of long spurs running out from the wall on the N. towards the centre of the floor. Murchison A is named CHLADNI by Lohrmann.