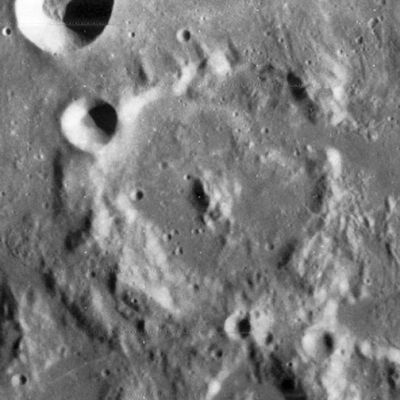 LOIV-109H1
Pallas at centre of frame, the bowl-shaped crater Bode near the frame's upper left corner, part of Murchison at the frame's right margin.

(IAU Directions) PALLAS.--A fine ring-plain, about 32 miles in diameter, forming with Murchison an especially beautiful telescopic object under suitable illumination. Its brilliant border, broken by gaps on the E., where it abuts on Murchison, has a bright crater on the N.W., from which, following the curvature of the wall, and just below its crest, runs a valley in an westerly direction. There is a large bright central mountain on the floor, with a smaller elevation to the S. of it, and a ridge extending from the N. wall to near the centre. On the E., a section of the border is continued in a N. direction far beyond the limits of the formation; and on the S. it is connected with a small incomplete ring; on the W. of which, near the foot of the wall, is a somewhat smaller and much duskier enclosure.

Peter Simon Pallas (September 22, 1741 — September 8, 1811) was a German zoologist and botanist who worked in Russia. Stony-iron meteorite type Pallasite named after him.