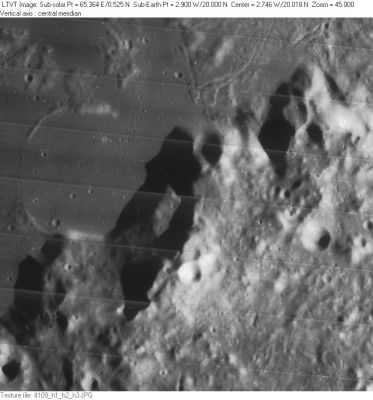 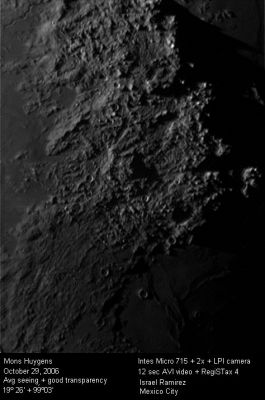 Right: LO-IV-109 Mons Huygens is the north-south ridge-like mountain mass in the center of this north-up aerial view. The headland in the lower left is Mons Ampère. The tallest part of Mons Huygens is in the bright cratered area to the right of Mons Ampère. Still farther to the right is 6-km Huyens A, the only lettered crater named after the mountain. The other features, including the prominent triangular headland in the upper right and the 26-km diameter ghost crater on the floor of Mare Imbrium, are unnamed.
Left: Israel Ramirez This mirror-inverted Earth-based image shows sunrise over Montes Apenninus. In the upper left quadrant one can see a prominent diagonal ridge with a spine-like back. It has a medium sized crater surrounded by spoke-like features to its lower right. The crater is 28-km Marco Polo and the ridge was once known as Marco Polo Gamma. Tracing the ridge to the upper right (west), one can find the peaks of Mons Huygens near the terminator. Slightly below them, the two points of light mentioned by Danny Caes (see Additional Information), are elevated points on the spine of Mons Ampère catching the rays of morning light. The feature that looks like Mons Ampère below the two dots is actually some lower, unnamed peaks to its south.

(IAU Directions) MOUNT HUYGENS.--A mountain mass projecting from the escarpment of the Apennines, in N. lat. 20 deg., W. long. 3 deg., one peak rising to 18,000 feet above the Mare Imbrium.