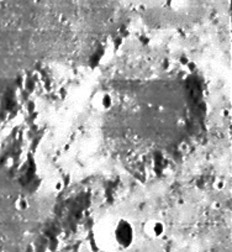 LO-IV-091-H2 Mason is the crater near the center. The crater partially visible to its lower left is its similarly-sized companion Plana. The cookie-like mass filling the left half of the image is regarded as a volcanic dome by Schultz, 1976 (pp. 150-151).

(IAU Directions) MASON.--The more easterly of two remarkable ring-plains, situated in the highlands on the S. side of the Lacus Mortis. It is 14 miles in diameter, has a distinct crater on its S. wall, and, according to Schmidt, a crater on the W. side of the floor.