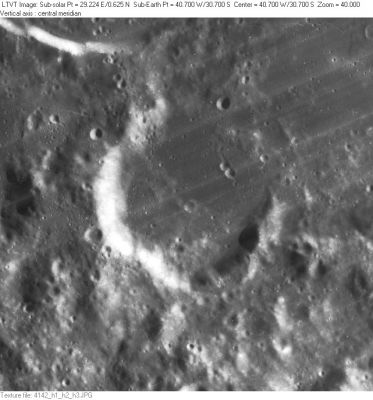 LO-IV-142H Lee is in the center. A piece of the south rim of Doppelmayer is visible at the top. The shallow 8-km just outside Lee’s southwest rim is Lee A and a little irregular 4-km pit in the upper left, near the margin at about 10 o’clock from the center of Lee is Lee T. The entire upper right quadrant of this frame is regarded as part of Lee M, a 47-km ruined enclosure of the southwest floor of Mare Humorum between Doppelmayer and Vitello.

(IAU Directions) LEE.--An incomplete walled-plain, about 28 miles in diameter, on the S. side of the Mare Humorum, W. of Vitello, from which it is separated by another partial enclosure, with a striking valley, not shown in the published maps, running round its E. side. If viewed when its W. wall is on the morning terminator, some isolated relics of the wrecked N.E. wall of Lee are prominent, in the shape of a number of attenuated bright elevations separated by gaps. Within are three or four conspicuous hills.

John Lee; British astronomer, humanitarian (1783-1866). According to Whitaker, Lee, along with his younger friend William R. Birt, produced an outline map of the Moon introducing 85 new names, many of which are in use today. - Jim Mosher