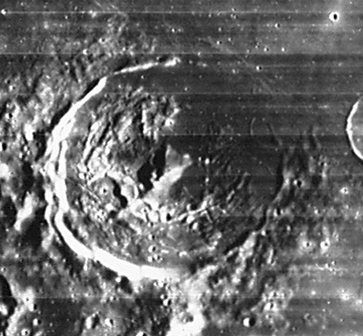 (IAU Directions) DOPPELMAYER.--Under a high sun this large ring-plain, 40 miles in diameter, resembles a great bay open to the N.E., without a trace of detail to break the monotony of the surface on the side facing the Mare Humorum. When, however, it is viewed under oblique morning illumination, a low broad ridge is easily traceable, extending across the opening, indicating the site of a ruined wall. There is an isolated mountain at the S.E. end of this, which casts a fine spire of shadow across the floor at sunrise. The interior contains a massive bright central mountain and several little hills. The crest of the wall on the W. is much broken.

Is it an irregular elevation, or a shallow depression? (trompe l'oeil effect near Doppelmayer J)

Johan Gabriel Doppelmayer (1671 –12/1/1750) was a German mathematician, astronomer, and cartographer. He completed his studies in 1698 with a dissertation on the Sun.

Doppelmayer Surprises Humor Me Once More