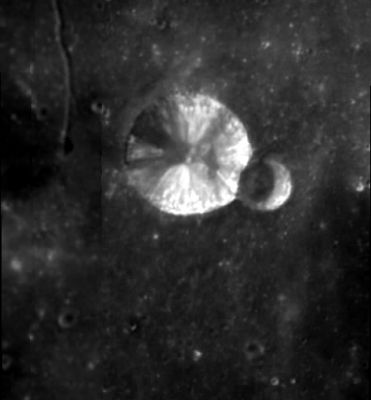 (IAU Directions) BIRT.--This ring-plain, about 12 miles in diameter, is situated on the Mare Nubium, some distance due W. of Thebit. It has a brilliant border, surmounted by peaks rising more than 2,000 feet above the Mare, and a very depressed floor, which does not appear to contain any visible detail. A bright crater adjoins it on the S.E., the wall of which at the point of junction is clearly very low, so that under oblique light the two interiors appear to communicate by a narrow pass or neck filled with shadow. I have frequently seen a break in the N.E. wall of Birt, which seems to indicate the presence of a crater. There is a noteworthy cleft on the W., which can be traced from the foot of the W. wall to the hills on the N.W. It is a fine telescopic object, and, under some conditions, the wider portion of it resembles a railway cutting traversing rising ground, seen from above. It is visible as a white line under a high light.

New Observations of a Well-Known Area
The Beetle
Succession
The Truth (Kaguya's splendid close up of Birt and Birt A).
No Longer Straight (Kaguya's close up of Rupes Recta, with Birt/ Birt A near the horizon).

Articles in which W.R.Birt is mentioned :