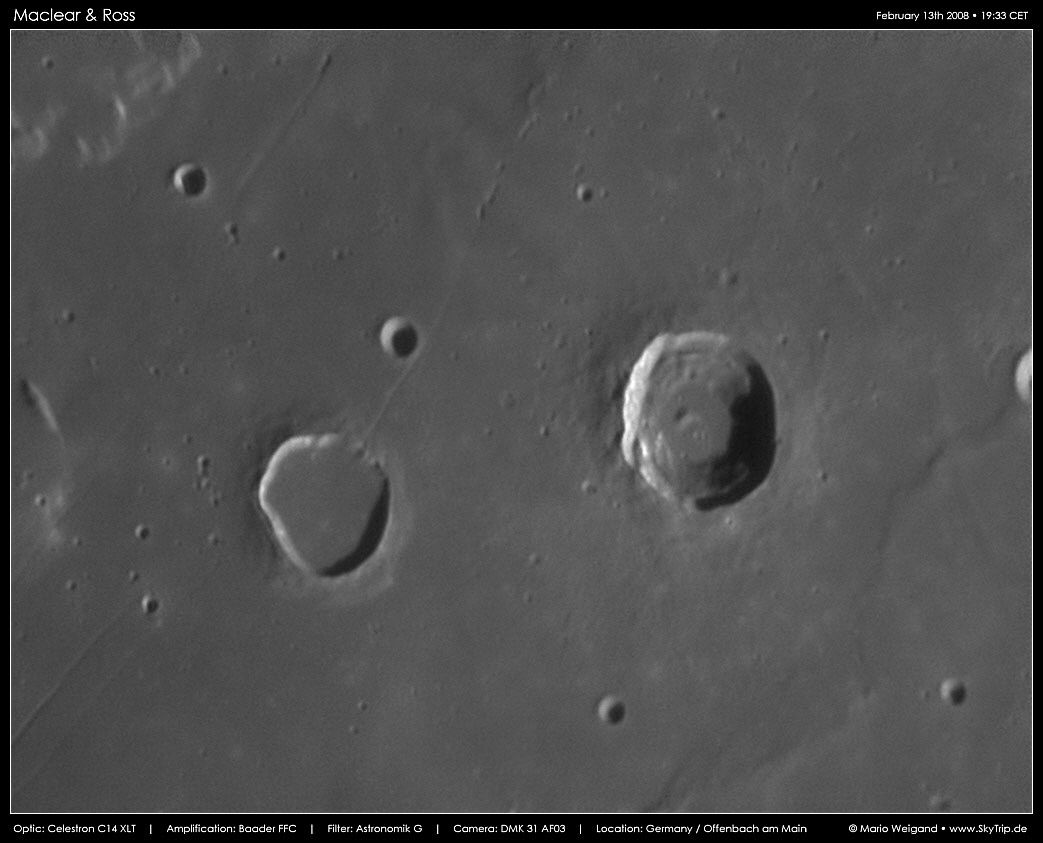 Wonderful! Ross, Maclear and the northwest corner of Mare Tranquillitatis - an area that has not been featured previously in high-res LPOD views. This means that there are new stratigraphic relationships to untangle. Maclear, the 20 km wide crater to the left is a Gambart-type crater with walls that appear to be triangular in cross-section (rather than much steeper on the inside than the outside). These craters have no terraces or central peaks and their flat floors are roughly at the same elevation as the surrounding maria. They are always surrounded by younger maria as shown by the well defined break in slope where their outer rims meet the maria. Are they normal complex craters transformed to this characteristic morphology by lava on their floors and surrounding them, or they basin secondaries - both suggestions have been proposed. Ross (26 km) is more complicated. The roughness associated with its near rim ejecta seems to be under the mare in some places and perhaps on it in others. And there is a hint of a faint ray to the upper right. I think that only thin layers of lava flows cover the ejecta, and the crater is older than at least the youngest lavas that surround it. Ross is a Tycho-like crater with slightly muted terraces and a central peak that is reduced in relief by lava fill. The rille that extends from the rim of Maclear northward (up and slightly to the right on this image) is intriguing. Does the rille cut the crater rim? Perhaps, but it doesn't cut its floor. To the north the rille fades to near indetectablity but its likely continuation is marked by four or more elongated depressions. I interpret these as collapses in the roof of the underlying lava tube. And just at the top edge of the image is a partial oval ridge - is this a pyroclastic vent? There is a lot going on here, with more to fully understand.

SOMETHING NEW!
To post comments regarding this LPOD, please click here and enter your text just below the word "Comments". Perhaps if comments are more visible, there will be more of them! You will not see the Edit tab unless you register for the wiki. Please do not edit the LPOD itself!

I'm a bit confused about the collapsed lava tubes.

There certainly seem to be elongated pits along Rima Maclear I (top center), as well as the one Mario shows at the end of Rima Maclear II (in the upper left - which itself seems to be a possible extension of Rima Sosigenes I, just visible in the white patches to the west of Maclear); and there are enough more of these elongated pits out of the frame to the north that in the System of Lunar Craters Rima Maclear I was regarded as a continuous rille running all the way to the crater Al-Bakri (see SLC map B4 and LO-IV-085).

What confuses me is that I thought I'd learned that long track-like rilles of this sort are "graben" caused by seismic faulting, and that any connection with volcanism would be secondary. I would have thought lava flowing up through the cracks at the edges of a graben might be expected to produce domes in the areas of outflow, but is there some reason to think it would cause further subsidence instead?