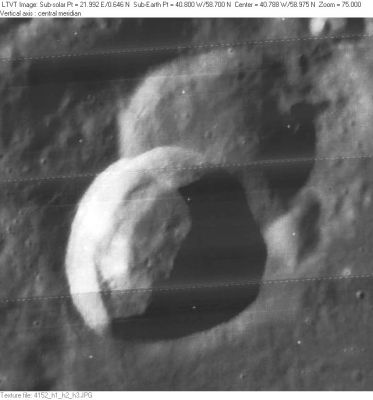 LO-IV-152H Horrebow is to the lower left of center, overlapping 25-km Horrebow A in the upper right.

(IAU Directions) HORREBOW.--A ring-plain of remarkable shape, resembling the analemma figure, standing at the S. end of the mountain range bounding J.F.W. Herschel on the E. Schmidt shows a crater on the E. wall, near the constriction on this side, and a second at the foot of the slope of the W. wall.

Copernicus on the Limb

A certain Horrebow in the Sourcebook Project (William R. Corliss)

Note: these strange articles are from the days when a natural satellite in orbit around Venus was still seen as a possibility... (or perhaps not?). Anyway, the observing eyes of lots of professional and amateur astronomers were glued to the eyepieces of their telescopes. Perhaps a bit too much glued, because most of them didn't observe the supposed "natural" satellite (called "Neith"), but... rather the unexpected ghost image of the bright Venus itself, reflected between the lenses of the telescope's eyepiece! (a visual side effect created by poor optics, or...??). - DannyCaes Apr 19, 2015
We could ask questions about telescopic observers of binary and multiple star systems. Were they really observing binary and multiple stars, or were most of them just adjacent ghost images of singular bright stars? - DannyCaes Apr 19, 2015