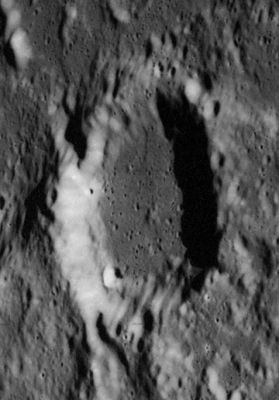 Ap_16_M572 Note: this orbital image was taken at an oblique angle (25° camera tilt), which accounts for the elliptical appearance of the crater.

(IAU Directions) HALLEY.--A ring-plain, 21 miles in diameter, on the S.E. border of Hipparchus, with a bright wall, rising at one point on the W. to a height of 7500 feet above the floor, which is depressed about 4000 feet below the surface. Two craterlets on the floor, one discovered by Birt on Rutherfurd's photogram of 1865, and the other by Gaudibert, raised a suspicion of recent lunar activity within this ring. A magnificent valley, shown in part by Schmidt as a crater-row, runs from the S. of Halley to the E. side of Albategnius.