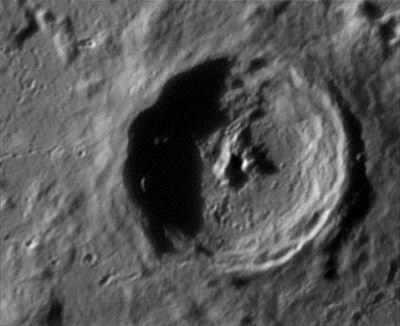 The pair of bowl-shaped craters Eratosthenes A and B, south of Wallace:

(IAU Directions) ERATOSTHENES.--A noble ring-plain, 38 miles in diameter; a worthy termination of the Apennines. The best view of it is obtained under morning illumination when the interior is about half-filled with shadow. At this phase the many irregular terraces on the inner slope of the W. wall (which rises at one peak 16,000 feet above an interior depressed 8,000 feet below the Mare Imbrium) are seen to the best advantage. The central mountain is made up of two principal peaks, nearly central, from which two bright curved hills extend nearly up to the N.E. wall,--the whole forming a V-shaped arrangement. On the S. there is a narrow break in the wall, and the S.E. section of it seems to overlap and extend some distance beyond the S.W. section. The border on the S.E. is remarkable for the great width of its glacis. Eratosthenes exhibits a marked departure from circularity, especially on the W., where the wall consists of two well-marked linear sections, with an intermediate portion where the crest for 20 miles or more bends inwards or towards the centre. From the S.W. flank of this formation extends towards the E. side of Stadius one of the grandest mountain arms on the moon's visible surface, rising at one place 9,000 feet, and in two others 5,000 and 3,000 feet respectively above the Mare Imbrium) . If this magnificent object is observed when the morning terminator falls a little W. of Stadius, it affords a spectacle not easily forgotten. I have often seen it at this phase when its broad mass of shadow extended across the well-known crater-row E. of Copernicus, some of the component craters appearing between the spires of shade representing the loftiest peaks on the mountain arm. There is a prominent little crater on the crest of the arm between two of the peaks, and another on the plain to the east.