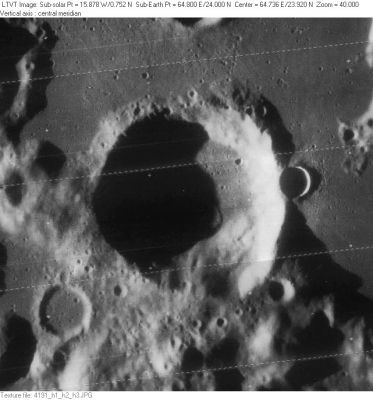 LO-IV-191H The 7-km crater on the east rim is Eimmart A. A small piece of 14-km Eimmart G is visible along the top margin.

(IAU Directions) EIMMART.--A conspicuous ring-plain with bright walls on the N.E. margin of the Mare Crisium. The W. border attains a height of 10,000 feet above the interior, which, according to Schmidt, has a small central mountain. There is a rill-like valley on the W. of the formation.

Change in a Lunar Crater (Eimmart)