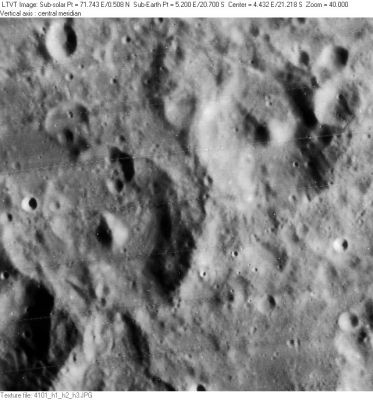 LO-IV-101H The two similar craters are Faye (left) and Donati (right). The shadowed region in the lower left is the eastern part of 46-km Delaunay.

LPOD Photo Gallery Lunar Orbiter Images Apollo Images
- Although Donati is not mentioned in the LPI's search list for orbital Apollo photographs, it WAS captured on several frames made by Apollo 16's south-looking mapping/metric Fairchild camera, such as frame AS16-M-0707, in which Donati and Faye (and their central peaks) are noticeable near the central part of the curved horizon.
- Research: Danny Caes.

(IAU Directions) DONATI.--A ring-plain on the S. of Airy C, about 22 miles in greatest length. It is very irregular in outline, with a lofty broken border, especially on the N. and S., where there are wide gaps. There is another ring on the S.W.