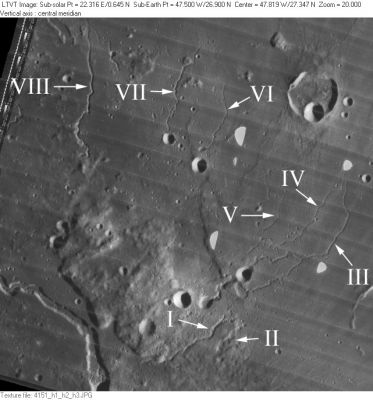 Lunar Orbiter IV-151H This image shows the region of the Aristarchus Rilles from Schröter's Valley (in the lower left) to Krieger (in the upper right). The Roman numerals indicate the named components of Rimae Aristarchus shown on the System of Lunar Craters Quad Maps and LAC-39.

(IAU Directions) The mountain plateau N. of Aristarchus deserves careful scrutiny, as it abounds in detail and includes many short clefts.