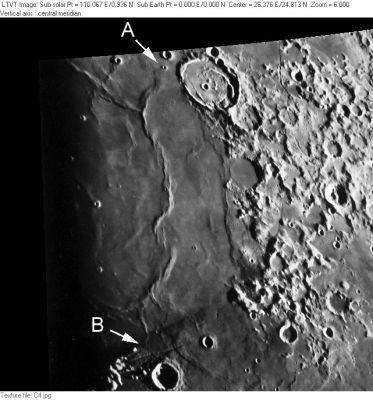 Consolidated Lunar Atlas plate C4 The "Serpentine Ridge" is the long series of mare ridges extending from "A" to "B".

(IAU Directions) Mare Serenitatis ... includes besides one of the longest and loftiest (ridges) on the moon's visible surface -- the great serpentine ridge, first drawn and described nearly a hundred years ago by the famous selenographer, Schroter of Lilienthal. Originating at a little crater under the north-west wall of great ring-plain Posidonius, it follows a winding course across the Mare toward the south, throwing out many minor branches, and ultimately dies out under a great rocky promontory--the Promontory Acherusia, at the eastern termination of the Haemus range. A comparatively low power serves to show the curious structural character of this immense ridge, which appears to consist of a number of corrugations and folds massed together, rising in places, according to Neison, to a height of 700 feet and more.