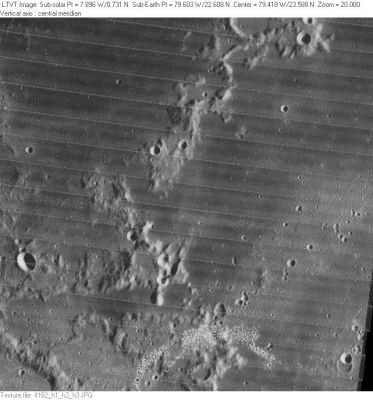 LO-IV-182H This name apparently was applied to the west wall of Struve, the 164-km diameter crater that occupies the right half of this image. The smooth-floored crater partially visible along the top edge is 19-km Russell B, and the relatively low arc in the extreme lower left corner is the northeast rim of 62-km Balboa B. The name Montes Hercynii appears to have embraced at least the central part of the "range" extending between these points; but its exact limits are unclear.

(IAU Directions) Hercynian Mountains, on the north-west limb, west of the walled plain Otto Struve. These are too near the edge to be well observed, but, from what can be seen of them, they appear to abound in lofty peaks, and to bear more resemblance to a terrestrial chain than any which have yet been referred to.