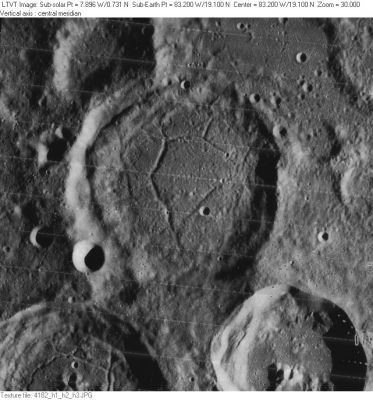 LO-IV-182H Balboa is in the center. The crater with the central peaks, partially visible in the lower right, is Balboa A. Just out of the field (below the peaks) it has a fascinating swirling flow pattern on its floor, similar to Abenezra. To its right is Dalton. The irregular enclosure to the northeast of Balboa is Balboa B. The 30-km diameter crater in the upper left is unnamed.

The western part of Balboa shows some sort of "double rim" effect. This is a phenomenon which is not unique in these regions of the western "shoreline" of Oceanus Procellarum. Other examples which also show a "double rim" are: Krafft H and Krafft K, and especially Lavoisier C and Lavoisier T. - DannyCaes Aug 7, 2014