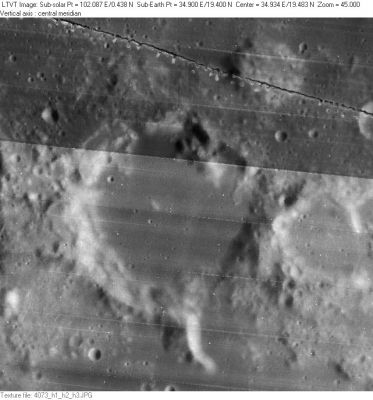 LO-IV-073H Maraldi is in the center. The button-like circle of hills to its northeast is Mons Maraldi. 18-km Maraldi F is just to the right of the main crater, and half of 8-km Maraldi A can be seen above it along the right margin.

(IAU Directions) MARALDI.--A deep but rather inconspicuous formation, bounded on the E. by a polygonal border. A small ring-plain with a central mountain is connected with the S.E. wall; and, running in a N. direction from this, is a short mountain arm which joins a large circular enclosure with a low broken border standing on the N. side of the Mare Tranquillitatis.