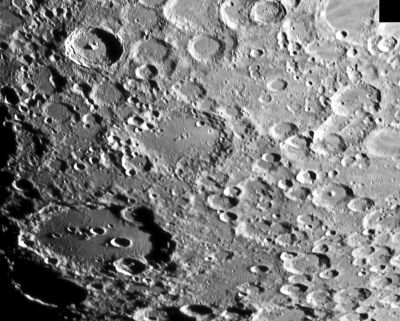 (IAU Directions) MAGINUS.--An immense partially ruined enclosure, at least 100 miles from side to side, on the S.E. of Tycho, from which it is separated by a region covered with a confused mass of ring-plains and craters. On almost every part of its broken border stand large ring-plains, many of which, if they were isolated, or situated in a less disturbed region, would rank as objects of importance; but among such a multitude of features they pass unnoticed. The largest of them occupies no inconsiderable part of the S.W. wall, and is quite 30 miles in diameter, its own border being also much broken by depressions, as, indeed, are those of almost all the six or more large ring-plains which define the N. limits of Maginus. The loftiest portion of what remains of a true border rises at one place to more than 14,000 feet. On the floor, which is traversed by some of the Tycho rays, there is a mountain group associated with a crater, nearly central, and several large rings on the N. side. Though the formation is very difficult to detect under a high sun, Madler's dictum that "the full moon knows no Maginus" is not strictly true.

A curious system of "horizontal" depressions and lines on the northern inner slopes of Maginus is a noteworthy telescopic target. See LPOD What Do You See?
Trivia
In his book THE OLD MOON AND THE NEW (1969), Page 193, V.A.Firsoff wrote:
"Some observers have reported 'vivid greens', mostly in the maria seen at small phase, but also, for instance, on the southern slopes of Maginus and near the Rheita valley". (D.Caes research).

A Busier Longo
Little Clavius
What Do You See?