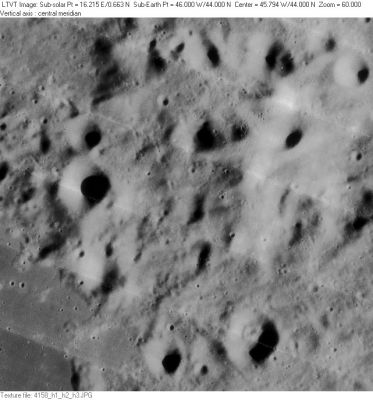 LO-IV-158H Louville, according to the position and diameter listed in the on-line IAU Planetary Gazetteer occupies the central part of this frame, but it is very difficult to see any clear evidence of a distinct crater at this location. To the left of center, the crater with the largest shadow is 8-km Louville B. Theoretically, this lies just inside the west rim of "Louville". On the bottom, the same-sized Louville A has an inner feature that makes it look a bit like an incompletely-developed concentric crater. Louville A is just outside the southeast rim of "Louville". To its left, 6-km Louville E is also just outside the official south rim of "Louville". Low sun views reveal mostly that Louville B and the sunlit ridge in the right-hand part of this view are a bit taller than the many other hills in this mountainous area.

LPOD Photo Gallery Lunar Orbiter Images Apollo Images
Louville DA, which is Concentric Crater number 37 in C.A.Wood's list of 1978, is visible near the lower margin of Lunar Orbiter 4's frame LOIV-163-h3. In the same photograph, near the frame's lower left corner, is a peculiar surface formation which shows something like a "double western rim". Is this some sort of possible Concentric Crater tendency?
Research: Danny Caes

(IAU Directions) LOUVILLE.--A triangular-shaped formation on the W. of a line joining Mairan and Sharp. It is hemmed in by mountains, one of which towers 5,000 feet above its dusky floor.