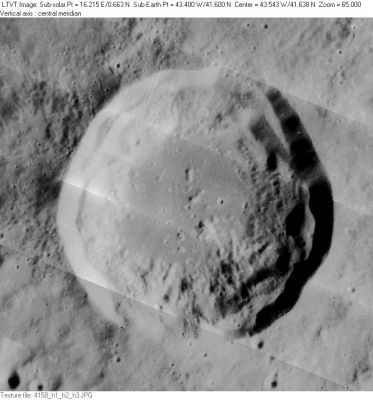 (IAU Directions) MAIRAN.--A bright ring-plain of irregular shape, 25 miles in diameter, on the W. of The Heraclides Promontory. The border, especially on the W., varies considerably in altitude, as is evident from its shadow at sunrise; at one peak on the E. it is said to attain a height of more than 15,000 feet above the interior. There is a very minute crater on the crest of the S. wall, down the inner slope of which runs a rill-like valley. About halfway down the inner face of the W. wall are two other small craters, connected together by a winding valley. These features may be seen under morning illumination, when about one-fourth of the floor is in sunlight. Schroter is the only selenographer who gives Mairan a central mountain. In this he is right. I have seen without difficulty on several occasions a low hill near the centre. The formation is surrounded by a number of conspicuous craters and crater-pits. On the N. there is a short rill-like valley, and another, much coarser, on the S.