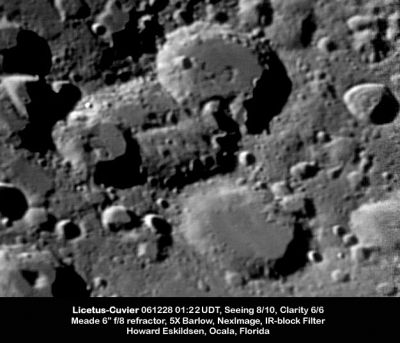 Howard Eskildsen Licetus is at the top, overlapping Heraclitus. Cuvier is to the lower right.

(IAU Directions) LICETUS.--An irregular formation, about 50 miles in maximum width, on the S. of Stofler, with the flanks of which it is connected by a coarse valley. Neison points out that it consists of a group of ring-plains united into one, owing to the separating walls having been partially destroyed. This seems to be clearly the case, if Licetus is examined under a low sun. On the W. side of the N. portion of the formation, the wall rises to nearly 13,000 feet.