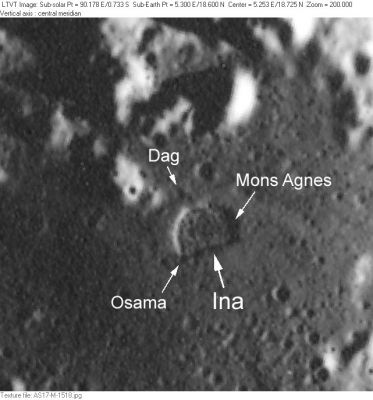 Left: Mick Hyde Ina can be spotted in the upper part of the plateau in the center of this frame. The crater near the bottom is Yangel'. The mare areas include Lacus Felicitatis (to the left of the Ina plateau), Lacus Odii in the upper right, and a part of Lacus Doloris in the lower right.
Right: AS17-M-1518 Ina is the D-shaped crater pointed to by the white arrow in this extreme enlargement of the area around the crater. The other IAU-approved names in this small area are Dag, Osama and Mons Agnes.

Orbital Hasselblad photographs of Ina, made by the astronauts of Apollo 15 and Apollo 17: (research Danny Caes)

Ina is the most well-known one of the moon's many mysterious IMPs (Irregular Mare Patches). We don't know a thing about the conditions of the surface of Ina. The Lunar Reconnaissance Orbiter's (LRO's) Hi-Res close up photographs of most of the IMPs look very unpredictable, it's as if IMPs are made of an odd substance which could not support a lander. Or is it just a layer of common regolith upon a sturdy solid underground?
As the Apollo astronauts once said: We barely scratched the surface of the moon. In other words: 99.9 percent of the moon's surface is still waiting to be explored. The IMPs (such as Ina) should be the very first targets on the list of a new project of lunar excursions! (unmanned or manned).

Who was Joaquin Miller's "Ina" ?