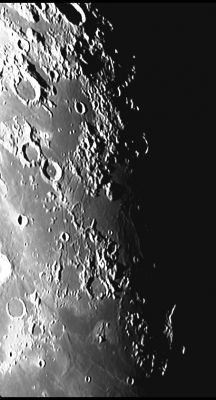 (IAU Directions) HIPPALUS.--A partially ruined walled-plain, about 38 miles in diameter, on the E. side of the Mare Humorum, S. of Agatharchides. At least one- third of the border is wanting on the S.W., but under a low sun its site can be distinguished by a faint marking and the obvious difference in tone between the dark interior and the lighter-coloured plain. The rest of the wall is bright and continuous, except at a place on the E., where what appears to be the segment of a large ring has encroached upon it. There are two craters in the interior of Hippalus, and a row of parallel ridges, running obliquely from the S.E. wall up to a cleft which traverses the floor from N. to S. E. of Hippalus stands a bright crater, Hippalus A, with an incomplete little ring-plain adjoining it on the N.E.; and N.W. of it a much larger obscure ring containing two little hills. The Hippalus rill-system is a very interesting one, and the greater part of it can, moreover, be easily traced in a good 4 inch achromatic. It originates in the rugged region W. of Campanus, from which five nearly parallel curved clefts extend up to the rocky barrier, connecting the N. side of this formation with the S.E. side of Hippalus. The most easterly of these furrows is interrupted by a crater on this wall, but reappears on the N. side of it, and, after making a detour towards the E. to avoid a little mountain in its path, runs partially round the W. flank of Hippalus A, and then, continuing its northerly course, terminates amid the mountains E. of Agatharchides. (A short parallel cleft runs W. of this from the little mountain to the W. side of A.) The most westerly member of the system, originating N. of Ramsden, enters Hippalus at the S. side of the great gap in the border, and, after traversing the floor at the E. foot of a ridge thereon, also extends towards the mountains E. of Agatharchides. Between these clefts are three intermediate furrows, one of which runs N. from the N. side of the encroaching ring already referred to, on the E. wall of Hippalus.