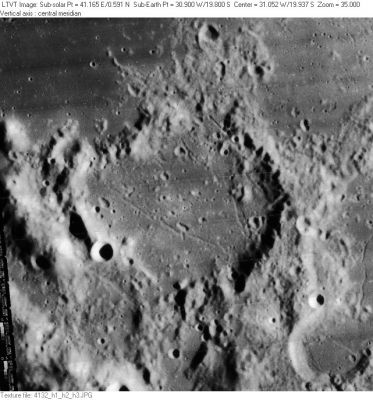 (IAU Directions) AGATHARCHIDES.--A very irregular complex ring-plain, about 28 miles in diameter, forming part of the N.E. side of the Mare Humorum. It must be observed under many phases before one can clearly comprehend its distinctive features. The wall is very deficient on the N., but is represented in places by bright mountain masses. The formation is flanked on the W. by a double rampart, which is at one place more than 5,000 feet in height, with a deep intervening valley. The S. wall is traversed by a number of parallel valleys, all trending towards Hippalus. These are included in a much wider and longer chasm, which, gradually diminishing in breadth, extends up to the N. wall of the latter.