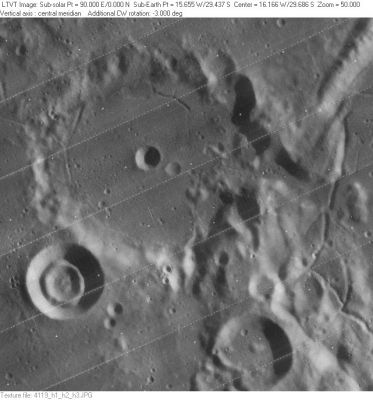 LO-IV-119H Hesiodus is in the upper left with 106-km Pitatus partially visible on the right. The fresh 5-km crater on Hesiodus' floor is Hesiodus D while the famous 15-km concentric crater Hesiodus A is to the southwest. Another (but less famous) 15-km crater, Pitatus H, is in the lower right. The rilles on the floor of Pitatus are part of the IAU-named Rimae Pitatus system. Those on the floor of Hesiodus are unnamed. The channel connecting the floors of Hesodius and Pitatus is an unusual feature, and a cone of light seen on the floor of Hesiodus as the Sun rises over this area has often been attributed to it. In truth, the channel deviates too much from a true east-west direction for the rising Sun to stream through it, but the rays of sunlight certainly pass over lower features in its vicinity than they do elsewhere.

(IAU Directions) HESIODUS.--This walled-plain, little more than half the diameter of PITATUS, has an irregular outline, and for the most part linear walls, which on the S. are massive and lofty (4,000 feet), but on the N. very low, and broken by gaps. There is a fine deep crater on the S. border, and a small but distinct crater on the floor, nearly central, the only object thereon which I have seen, though Schmidt draws a smaller one on the E. of it.

A mountain abutting on the N.W. side of Hesiodus is the E. origin of one of the longest clefts on the moon. Running in an W.S.W. direction, it traverses the Mare to a crater near the E. face of the Cichus mountain arm, reappears on the W. side of this object, and is finally lost amid the hills on the N. of Capuanus. The E. section of this cleft is coarser and much more distinct than that lying W. of the mountain arm. 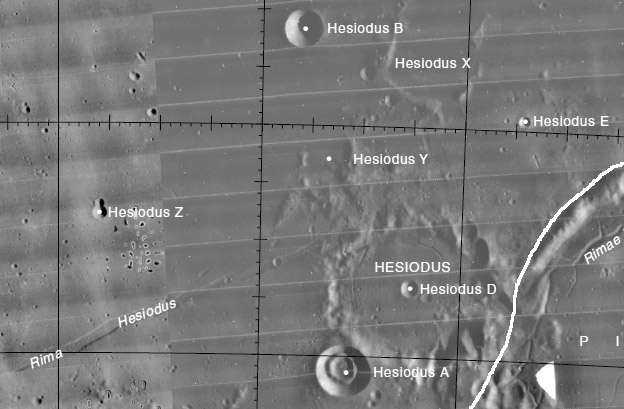