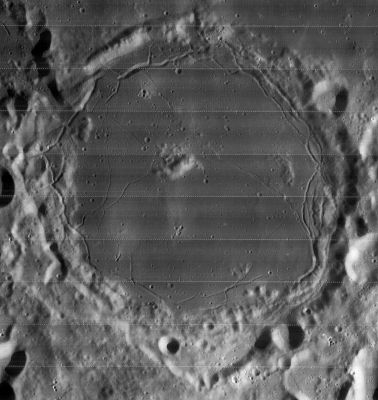 (IAU Directions) PITATUS.--This remarkable object, 58 miles in diameter, with Hesiodus, its companion on the W., situated at the extreme S. end of the Mare Nubium, afford good examples of a class of formations which exhibit undoubted signs of partial destruction, from some unknown cause, on that side of them which faces the Mare. On every side but the N., Pitatus is a walled plain of an especially massive type, the border on the S.W. furnishing one of the finest examples of terraces to be found on the visible surface. On the S.E., two parallel rows of large crateriform depressions, perhaps the most remarkable of their kind, extend for 60 miles or more to the E. flank of Gauricus. On the N.E., the rampart includes many curious irregular depressions and craters, and gradually diminishes in height, till, for a space of about 12 miles on the N., there can hardly be said to be any border at all, its site being marked by some inconsiderable mounds and shallow hollows. There is a small bright central mountain on the floor, and, S. of it, two larger but lower elevations. A distinct straight cleft traverses the N.E. side of the interior very near the wall, to which it forms an apparent chord, and a second cleft occupies a similar position with respect to the bright N.W. border. A narrow pass forms a communication with the interior of Hesiodus.