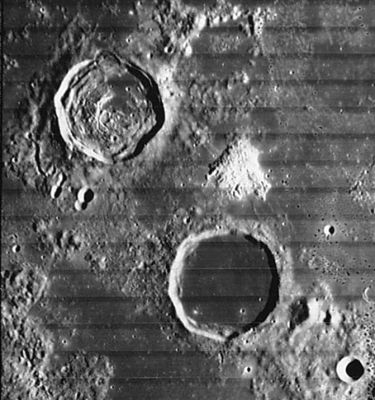 (IAU Directions) HANSTEEN.--A somewhat larger ring-plain, with a lower and more irregular rampart, rising on the E. to nearly 3,000 feet above the floor, which is depressed to about the same extent as that of Billy. Both the inner and outer slopes are terraced on the W., where the glacis is traversed by a short, delicate, rill-like valley. There are some bright curved ridges on the floor. On the E. of Billy and Hansteen is a wide inlet of the Oceanus Procellarum, bounded by the Letronne region on the E., and on the S. by lofty highlands. On the surface, not far from the S.E. border of Hansteen, is a curious triangular-shaped mountain mass, with a digitated outline on the S., and including a small bright crater on its area. Between this and the ring- plain is a large but somewhat obscure depression, N. of which lies a rill-like object extending from the N. point of the triangular mountain to the E. wall. At the bottom of a gently sloping valley between Billy and Hansteen is a de
licate marking, which seems to represent a cleft connecting the two formations.