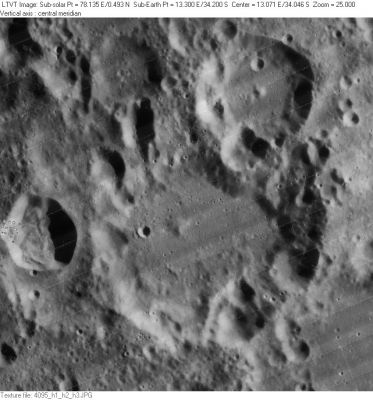 LO-IV-095H Gemma Frisius is in the center. The 46-km crater to its northeast is Goodacre. Many named lettered craters associated with both are also visible. The most prominent is probably the deeply-shadowed 28-km Gemma Frisius D, just outside the west rim of Gemma Frisius. Part of the northwest floor of 68-km Gemma Frisius A is visible in the lower right corner.

(IAU Directions) GEMMA FRISIUS.--A great composite walled-plain, 80 miles or more in length from N. to S., with a wall rising at one place nearly 14,000 feet above the floor. It is broken on the N. by two fine ring-plains, each about 20 miles in diameter, and on the W. by a third open to the W. There is a central mountain, and several small craters on the floor, especially on the E. side.