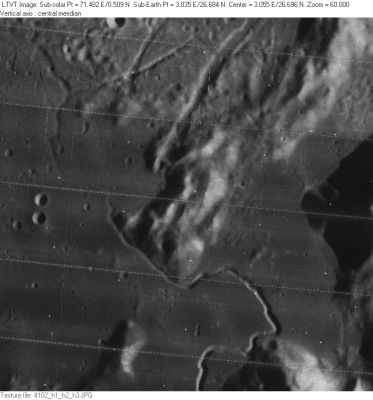 LO-IV-102H Fresnel Ridge is the hill at the center of this aerial view. Snaking around it to the south and east is Rima Hadley, while to its north and west are the beginnings of Rimae Fresnel. On the right of this image is the shadow of Mons Hadley. The sunlit peak in the lower right, with the 2-km crater St. George on its flank, is Mons Hadley Delta. The ridge, of which Hill 305 is the southern terminus, extends far to the north, but that extension does not appear to be regarded as part of this informally named feature. Note the pair of (officially unnamed) bowl-shaped craters immediately west of Hill 305 (this pair of craters is a fine test object for all sorts of telescopes!).

The unnamed twins west of Hill 305