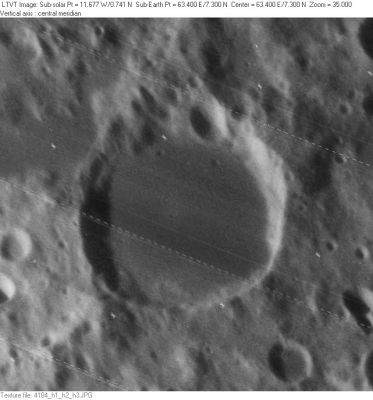 (IAU Directions) FIRMICUS.--A somewhat larger, more regular, but, in other respects, very similar ring-plain, N.E. of Apollonius. Some distance on the E., Madler noted a number of dark-grey streaks which apparently undergo periodical changes, suggestive of something akin to vegetation. They are situated near a prominent mountain situated in a level region.

Julius Firmicus Maternus, (fl. A.D. 330-354) a writer and notable astrologer, who lived in the reign of Constantine I and his successors. Author of Matheseos Libri Octo ("Eight Books of Astrology", c. 330).