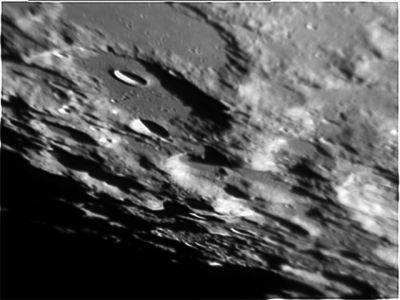 Gustavo Pohls Casatus is the distinctive crater in the upper left, with the smaller craters (Casatus C and J) on its floor and south inner wall.

(IAU Directions) CASATUS.--A large walled-plain, about 50 miles in diameter, S.W. of Blancanus, near the limb, remarkable for having one of the loftiest ramparts of all known lunar objects; it rises at one peak on the S.E. to the great height of 22,285 feet above the floor, while there are other peaks nearly as high on the N. and S. The wall is broken on the W. by a fine crater. There is also a crater on the N.E. side of the very depressed floor, together with some craterlets.

Mountains Near the South Pole.
On Top of the World