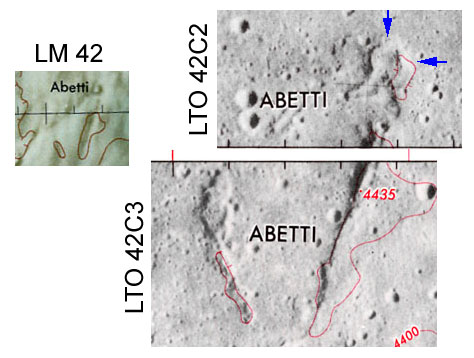 LM-42; LTO 42C2; and LTO 42C3 The small blip at the blue arrows seems the most likely identification of this feature based on the diameter of 1.5 km given in the on-line IAU Planetary Gazetteer (citing LM-42 as the map reference), although it seems to be the larger feature on LTO 42C3 that was actually approved by the IAU General Assembly in 1976.

Abetti (Note: the Wikipedia describes this as a "ghost crater", probably referring to the two ridges in Rükl and LTO 42C3)