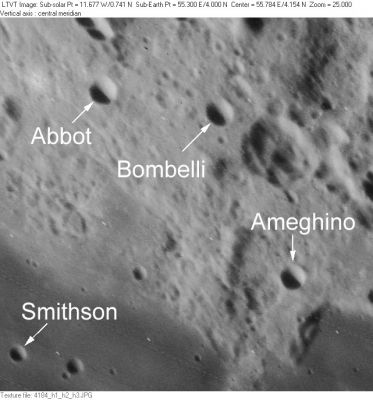 LO-IV-184H This small field straddling the northeast edge of Mare Fecunditatis includes the four IAU-approved crater names Abbot, Ameghino, Bombelli and Smithson. The relatively large, complex crater to the southeast of Bombelli is Apollonius A.

Note:
Flemish and Dutch readers should be aware of the appearance of C. G. Abbot in Julien Weverbergh's most interesting book on natural luminous phenomena (1980, Ankh-Hermes). Unfortunately, this book was (and still is) almost always located at the shelves of the category "esoterics" because of its name: UFO's In Het Verleden (UFO's In The Past). WARNING: this is not the umpteenth book on "flying saucers", this book is totally different! It is a valuable appendix to William R. Corliss's book Lightning, Auroras, Nocturnal Lights, and related luminous phenomena (The Sourcebook Project, 1982), and much, MUCH more! - DannyCaes Apr 15, 2015

- In Mysterious Universe, a handbook of astronomical anomalies (1979) :