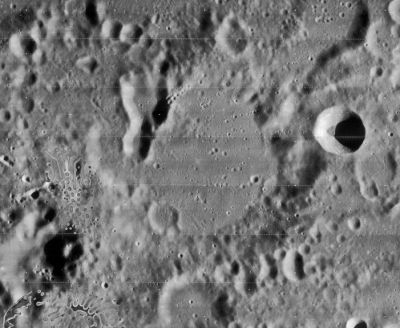 LO-IV-088-H3 A number of lettered craters named after Wilkins (and others) are visible in this view. Among these are Wilkins A (top) and B (bottom), the overlapping pair on Wilkins' northwest wall; Pons B, the fresh and deep 13-km on the right; Wilkins C, the shallow 20-km crater at the center of the bottom margin; and Zagut C, the ragged 24-km crater along the lower left edge.

A Bridge Too Far

And... who was William Wilkins? (see page 223 in the article Lights on the Moon by Stanley C. Ogilvy, Popular Astronomy, 1949)